I was really happy when Aria’s mother Connie called me from USA to ask if I could take the photos of their wedding at Geneva Lake. They liked my style among a lot of photographers in Europe and contacted me. First of all, this really excited me and made me happy. After we sealed the deal with Connie, we met with Aria and Daniel on Skype and gone through details. We were ready for the photo shoot.

We arrived at Lausanne with my friend Gökhan who was going to record the wedding. First we took off for Milan, then took a train to Zurich and rented a car to go to Lausanne. We toured the city and had some rest. We set off for Lutry which is settlement close to Lausanne in the morning of the wedding day.

The place was house of the cousin of Connie and she was living here with her two daughters. The location of the house was incredible. The front of the house and the garden was facing the Geneva Lake and you were able to see the Alps above the lake. The architecture and interior of the house were great too. At that moment, I realised why they chose this place for the wedding. They were 13 people in total with the couple and the place was ideal for such an organisation.

After the preparation photo shoot, the wedding ceremony stared with the beautiful lake and mountain view on the background. The speeches were very emotional and I focused on these moments as much as I could. This was one of the most simple and efficient wedding ceremonies I have ever witnessed. Rain started to fall at the end but this did not make us feel negative at all. It was over when the wedding ceremony ended. Then we took some photos in the house and garden and then the group photos and champagne followed.

We go in the cars around 16:00 and arrived at Vevey Funicular station. We got on the funicular and started to climb towards Mont Pelerin. It was a great journey. The view got better as we climbed up and created great moments both inside and outside for photos. When we got off, we made a quick outdoor photo shoot using the background and started to walk to legendary Le Mirador Hotel as our ultimate destination.

Le Mirador is both a secret and exceptional place for wedding organisations. The hotel was built as a hospital in 1904, renovated after the Second World War and became one of the most prestigious and luxurious Spa hotels of the world. It became an attraction point for Kennedy, the Japanese Emperor and Hollywood stars. This fame still goes on.

When we arrived at the hotel a very professional and kind crew greeted us. They were really caring for both us and the guests. The afternoon photo shoot started at the terrace of Le Mirador with the cocktail. Then we watched the clouds carry a heavy rain towards us from the west side of the lake. Right at this moment we had the chance to take photos of the couple with these black clouds on the background. After a while, we passed to dinner in another room. We took photos of the dinner in this room with antique chandeliers and paintings. The dinner ended around 22:00 and we turned back to our hotel.

This was one of the classiest and simple weddings I have ever witnessed. The Geneva Lake’s peacefulness and the couple blended and the day was exceptional.

I wish Aria and Daniel a long, happy life. 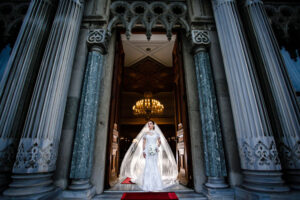 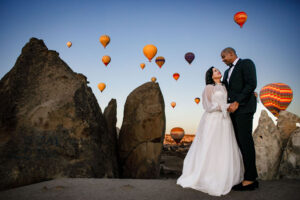