Stephanie and Darren have been married for 15 years and have two children. I was really surprised when they told me this. I thought that they got married when they were 10 years old because they were looking very young. The couple lives in Kuala Lumpur, Malaysia. Darren is a businessman being active in the watches industry. Thanks to Darren’s trusted managers who are managing its business, the couple has the change to take long trips. They often take vacations around the world. They generally prefer to travel without children.

As many couples from far eastern they also have gone on a Turkey-Greece tour. This is usually a double tour in the form of visiting both Cappadocia and Santorini. However, this couple also added Istanbul, which they were very curious about. They agreed with me for my services for their Istanbul and Santorini trip. If we need to name it, we can call it a travel portrait photo shooting. You can check their Santorini Pre Wedding Photos here.

We met with Stephanie and Darren at Fer Hotel, located at the heart of Istanbul, where they stayed. This hotel was very close to the Grand Bazaar. Firstly we wandered in the cool corridors of the Grand Bazaar, we went up to the roof of one of the inns and took photos on the magnificent old Istanbul and sea backdrop, accompanied by seagulls. From there on, we made a photo shooting of the historical gate of Istanbul University, the old Byzantine underground cistern and Topkapı Palace region. Two mutual architectural masterpieces Hagia Sophia and the Blue Mosque became our next place to go. We continued photo shooting on the magnificent terrace of Seven Hills, where we stopped to have a dinner.

Our last point was at Galata bridge on the beach. We said goodbye to meet again in Santorini the next week. 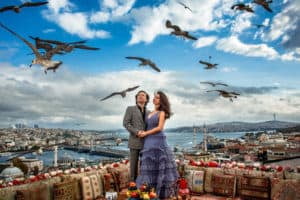 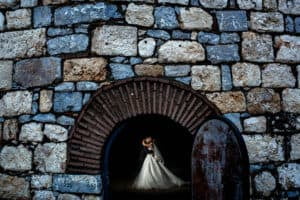 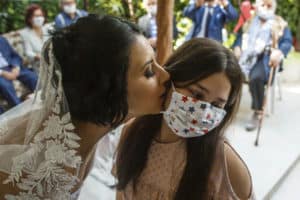