First, it all started when Amira’s mother, Becky, contacted me after she was looking for a photographer. The email from Becky said: “I am the mother of the bride. Are you available for an Istanbul outdoor pre wedding photoshoot and/or destination wedding in Istanbul? Your work is awesome!” You can read the whole story at the bottom of the page…

The couple and their family live in Houston, Texas, and there was going to be an engagement shooting first. We went even deeper in our correspondence with Becky. Her daughter Amira was a fragrance specialist and launched her own perfume brand. She was also a history buff. Her son-in-law, Eric, was a jazz musician. Based on these clues, it was necessary to determine points of attraction and to reflect their characters in Istanbul backgrounds.

I was more or less familiar with the jazz subject, the shooting locations were clear in my mind, but I really had no idea about the fragrance. I consulted this issue with Vedat Ozan, Turkey’s most important fragrance expert. He also gave great ideas. We were going to shoot in an old shop that produces scents with traditional methods in the Spice Bazaar.

Then we had our first online meeting with Amira and Eric. They were wonderful and kind people, like many of the Americans I’ve worked with. They liked the ideas I suggested very much, but they underlined that it was my wishes that mattered, not theirs. In fact, we decided not to use Eric’s jazz theme at all, instead we were going to do more old Istanbul tours.

We met at the Amira Hotel, one of the most beautiful boutique hotels in Sultanahmet, on the shooting day. Yes, the name of the hotel was Amira too 🙂 Dear Gökhan Çelem was with me to support me. First we started on a wonderful terrace with the seagulls. In the background, the Galata bridge, the two sides of the city, The Princess Islands, and the sea view were magnificent. Later, we shot in the courtyard of the Süleymaniye Mosque, which Mimar Sinan made in the name of Sultan Süleyman in the 16th century.

Sultanahmet Square, New Mosque, Spice Bazaar, Golden Horn shores became our next stop. Then we went to the other side of the Golden Horn and visited the Galata Tower. Turning the distracting and crowded streets here into clean backgrounds, using magmod diffusers was a new experience for me. Then we shot the sunset under the Golden Horn Metro Bridge and made the final shots on the Karaköy coast. Of course, we owe our ability to go to so many places in a place like Istanbul, where distances are long to walk, to the VIP minibus with the driver we rented.

We had a great day with dear Amira and Eric. I’m glad they liked your photos too. I look forward to the days when we will meet again at the weddings in Istanbul and the honeymoon shoots in Marrakech. 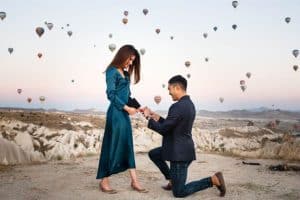 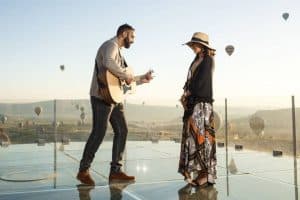 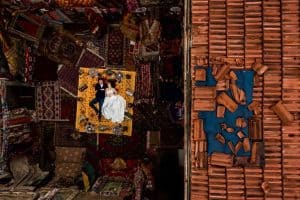